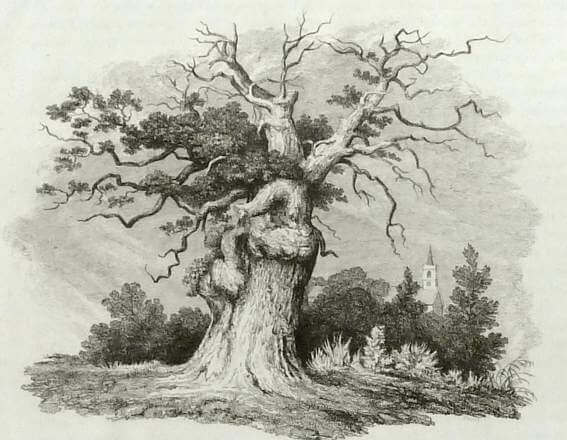 During my research for ancient assembly places in England, I found the entry below. It is about an oak that once stood in the village of Headingly, a suburb of the city of Leeds in West-Yorkshire, England. About that famous old oak, it was written:
“The principal object in the village of Headingly is the venerable oak, which has defied the storms of a thousand of winters, and which for hundreds of years has presented to the observer as a decaying memorial of ages long since past away. This remarkable tree has been conjectured by some – and the supposition is warranted by its evidently extreme antiquity – to have witnessed the horrible religious rites of the ancient Britons, and in fact to have formed part of a druidical grove. Universal tradition declares this to have been the tree and which, in Saxon times, the shire meetings were held, and from which the name of “Shyrack” (shire oak) has been imposed upon the wapentake.”

From Viking times, Headingley was the centre of the Skyrack wapentake or Siaraches, the “Shire oak”. The name may refer to an oak tree that was a meeting place for settling legal disputes and raising armies. An ancient oak, said to be the Shire Oak, stood to the north of St Michael’s Church until 1941.