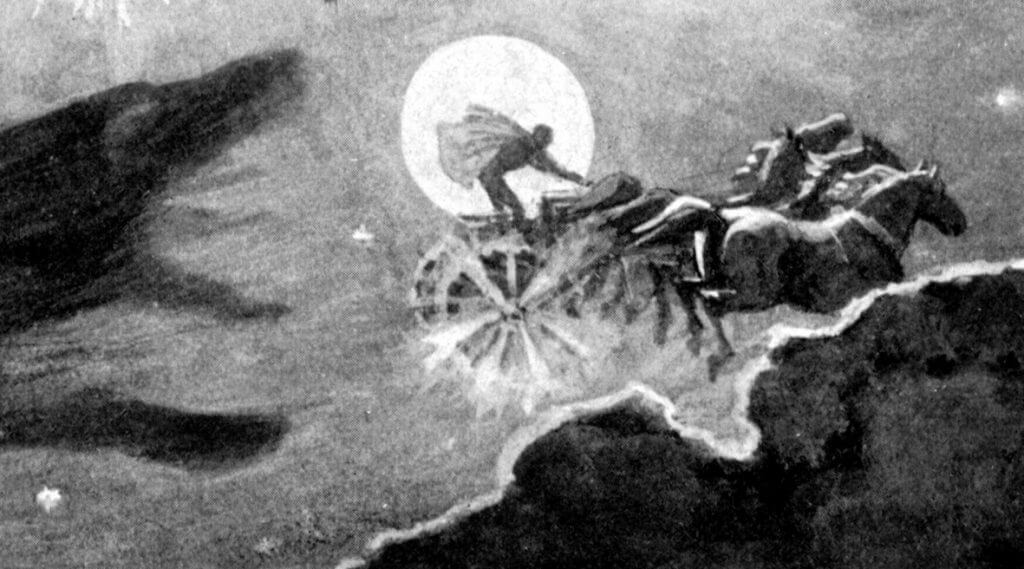 First a snippet from Norse mythology……
Mani (Máni) is an Oldnorse word for ‘moon’ and the personality Mani is often interpreted as the ‘moongod’, some call him a demigod, so a personified moon. However, that view is controversial. His father was the giant Mundilfari, his sister is called ‘Sol’ or Sunna, who is as a personality often seen as a sungoddess.

Mani drives his horse drawn carriage through the skies air and is accompanied by the children ‘Bil’ (the waning one) en Hjuki (de waxing one). In another view Mani is pushing the moon along it’s orbit.
His job there above wasn’t probably a voluntary choice, according to the myths he should be assigned by Woden for it as a kind of punishment for the name he was given by his father. On his way he is continuously persued by the wolf Hati. At Ragnarok (Doomsday) he is catched up by the wolf who will devour Mani, the wagon, horses, children and the moon.

So far this intro……

You, dear reader, are you a heathen? Did you perhaps dedicate yourself to Mani? If you didn’t that, you might consider that thoroughly. Because his influence on us should not be underestimated!
Yes, Mani has a well filled slate! Read on and you’ll get some insights about that..…

The ancient Greeks already knew and that is why their word for an obsession is ‘manie’ and the inhabitants Philippine Islands honored Mani by giving their Capital city his name … Manila.
Research has proven, that every second human, more precise, every second woman and almost every fourth man percieves the influence of the moon at themselves. Obviously we are not aware how much we’re manipulated by Mani.
According to a big scale enquiry some years ago, 52 % of the women believe, that the phases of the moon have influence on their sleep. 45 % is convinced, that the moon affects their state of mind, both positive and negative. Unfortunately the enquiry didn’t say a thing about the consequences, that many women let manicure their hands by a manicurist – and since even more and more men also manicure their hands, Mani’s grip on us had increased.
OK, men are less sensitive for moon influences than women, About 22 % says the moon influences their mood and 28 % think, the moon affects their sleep.
Well.. say for yourself…. together that is a lot of influence!
There are (macho) men who think, they’ve a better chance to get a woman laid when the moon is full, on the other hand, they smile (pseudo?) understanding about a woman who thinks, some gardening things should be done by waxing moon, other things at waning moon, because that should have a big influence on the natural effectivity.
A websearch showed, that there are people who think, much harm and suffering is caused by the moon or the responsible moongod Mani. From a female view, that may sound logical, because a male is responsible for the moon and in the eyes of many women men are in general principally guilty, never mind for what. So Mani is to blame… and that may be the reason for so many manic depressions.

On the other hand, the moon appears very positive in many songs and poems, often the moon is by those lyricists rather sentimentically praised to the skies. That is maybe a bit strange, because he was there already – the myths tell us, that Woden has put him there aeons ago.

Several alcoholic effects are also connected to Mani….. once a month the moon is full.. as a human is ‘full’ when he or she is zonked, smashed, blotto….. history tell us, that this was always a typical male quality. We may ‘thank’ Mani for it, that you need at full moon less alcohol to become drunk.

To stick another moment at that ‘male’….. as every man, also Mani has his weak, vulnerable characteristics….. that explains clear enough the waxing and waning of the moon, often he even disappears completely or Mani uses the clouds if there is some reason for him to stay out of sight. He may have done something to be ashamed of, or he did something that should kept secret, hidden.

Our gods, semigods and the other immaterial, spiritual beings need the attention and devotion of us humans. Loneliness leads, we all know that, to very curious reclusing behaviour and in the end often to lunacy and mania. Just think what all could happen if Mani became mad! Therefore we do have to worry and concern for Mani, we have to give him our affection and, because we humans are really traders, we expect and indeed we get something back for that attention…. at least an increasing of our emotional, inner life…… called monomania.

Insiders know, ancestor worship reaches back to Mani, already the Romans from classical Antiquity knew that and that is why they called it Manism (MANISMUS) when they meant the worship of ancestors or in general the dead.
The Romans also knew the same kind of the savagery and reckless frenzy in battle the Germanics knew as Berserks; they brought such men together in a small fighting unit which they called MANIPEL, as a part of a cohort, a bigger millitary unit.

Even the ancient Babylonians knew our Mani; he founded there a religion to let people venerate him – as a matter-of-course, that religion is known as Manichaeism and was one of the first big world religions. We know this from Mani because of a manuscript from the 5th century which is preserved in the German city of Cologne – that is why the document is called the ‚Cologne Mani-Codex‘.

And the early Persian people (now called Iranian) knew Mani in their ancient religion called Zoroastrianism. Another name for Mani there was Ahriman and he was the bad opponent of the ‘good’ Ahura Mazda; the Persians must have had bigger objections towards the moon.
By the way, the Persian expression ‘Arimani‘ means ‘god of the Aryans’ and that meant in those old days just ‘god of the brave men’; only in 20th century Europe that Aryan concept became abused… most extremely by the Nazis.

There is even more ….
Far outside Europe, in North America, many Indian people know the Germanic god Mani. They even attested him a leading role among their gods – anyone must have hear from different stories their veneration of Manitou, whose name later also survived in the name of the Canadian province Manitoba.
And, as a closing note, it should not be odd anymore after this all that Mani also appears in the Buddhistic religion in their well-known mantra ‘Om mani padme hum’.

After all this information it may even for the most simple minded has become clear that Mani is a global deity, the only Germanic god who is widely revered.

You know, there are still some places free for those who shrive for the initiation for a Mani-priest. They have the task to organize and propagate Mani’s annual festival, his alleged Manifestation.
So, come on if you like …. but don’t get out of line!