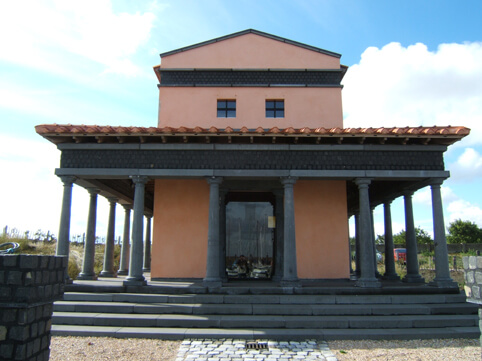 With thoughtful faces, Dagomar and Sibald left the official residence of the legate Ignatus. They had taken on the task of leaving their quarters with their followers which were located at about two hours riding from Colonia Claudia Ara Agrippinensium, going the long way West to the shores of Mare Britannia. Both were to move to the lands near the Delta of the Scaldis and settle there.
They had two tasks: to ward off raiders coming from the sea, each of them had to choose a favorable place to build a port so that warships could help defend the coast.
When they received the details, it became clear to them that this was not a mission of war like the previous campaigns from which they would return one day, this was a standing order. At first they were rather unhappy because the center of trade and culture was here, along the Rhenus, but the legate had made plenty of concessions. Normally, it was not allowed for war troops to have their own families, but this was now redeemed. Ignatus had promised that a military road leading West would be built as quick as possible, and that they would be able to have a lively trade that way. They were also allowed to permanently own their land and have families.
“Very well,” said Sibald, mounting his horse, “it has to be, even if my men will grumble seriously in the beginning. I will therefore first visit the other warlords and ask them to reject any of my men, should they apply. Then my men will be given the free choice to stay or join another leader.” He grinned wolfishly. Dagomar grinned back even wider and said: “You think like a Roman. Now talk to the other leaders also for my group and I’ll do the same to my men.” They waved goodbye and returned to the settlements of their warriors.
Three months later, Sibald had his mercenaries brought on the way. It had taken a lot of time to organize everything. Over half of his men had married, and after the new accommodations were built, the women were allowed to come along. The Tribune Marcellus, his direct superior, had agreed that the women, with several carts of goods, were to follow in three moons with a heavy escort. A small unit of Roman mercenaries of Marcellus’ legion were then to remain by the shore to enable efficient communication.
They had been able to move their households to newly arrived legion units and in exchange they were given many serviceable resources such as horses, oxen, tools and other everyday objects.
He was still smiling when he thought about the look on his substitute’s face when he learned about the assignment. He had protested, claiming that he had been working so hard on a new house for more than two months to build the biggest and most beautiful house in the district, and now all of this should have been in vain? Furious, he went to another warlord and asked to join his troops because he didn’t want to give up on his house so easily.
But, as expected, the warlord had told him that there was no need for additional men at the moment, but that he may come back in four or five moons, maybe then, perhaps, there would be vacancies again. Other men had experienced the same. And when it became known that their accommodations would be made available to a new legion, they gave up and worked hard on the preparations for the mission.
A few days before departure, Sibald and Dagomar had invited the eight other warlords to the farewell party and they had had a lot of fun telling the stories of the unsuccessful requests for admission.
Contemplating all these events while riding his horse, he was startled as the Roman architect Ganuentus, who accompanied his troops and was to lead the construction of the port fortifications, suddenly said:
“Centurio Sibald, what will you name your new place?” – “I don’t know yet,” he replied, “is that important?” – “I have to report regularly to the legate about the progress”, answered Ganuentus, “and a name would make a good impression.”
“Since you are building the whole thing, we could honor it with your name,” said Sibald half seriously, half jokingly, and looked at the master builder attentively. “I would feel honored,” was the quiet answer. “Good,” Sibald concluded. “Then it will be Ganuenta, which means ‘camp by the water’ in my language, so it’s very appropriate.”
The master builder looked thoughtful then, seemingly he was no longer sure whether he’d feel happy with this decision.