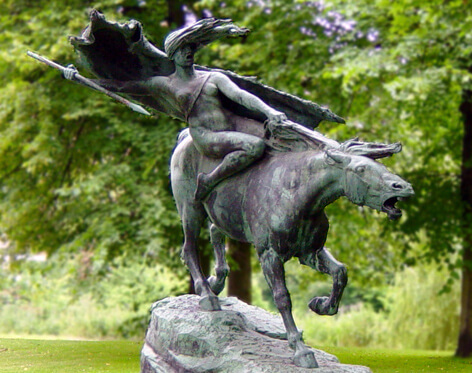 The text read out loud by an artificial voice:

A Day in Asgard

He had tried to make an emergency landing on one engine, but as that second and last engine also stopped working, he had no other choice than pressing the button of his ejection seat. A panic ran through him as nothing happened. He was ‘imprisoned’ in his small plane that was falling down like a stone now. Shortly before the crash, he closed his eyes, as he opened them again after a terrible crash, he was laying on the ground and beside him stood a very futuristic-looking motorcycle, and there was a beautiful, dark-haired woman sitting on it, who said to him: “If you would have the goodness to stand up, then we can go, I have to do a lot more orders today.” Very confused he looked up to her, and the only thing that came up in him was: “Who are you?”

“Oh yes, I didn’t introduced myself yet, well, my name is Hilda, and I am the responsible Valkyrie for this section.” “Valkyrie”, he managed to stammer. “Yes, Valkyrie” was the reply, and she continued talking: “I see you are at the moment not really in a clever mood, therefore I’ll explain it to you in simple words. You died just a few moments ago and now I’m here to bring you to Valhalla. Because the dead should not stay here hanging around on Midgard. That would cause too much ghost-smog. In addition, it is also against the rules. Well, get up and rise, sit down behind me then we can go. You will have later lots of time to get everything explained in detail.”

Still totally confused, but captivated by the beauty of the woman he stood up, dusted off his clothes and sat down behind her on that strange oddly bike. No sooner he had set his feet on the designated footrests or they drove away in a breath-taking speed. It went so fast that everything around him blurred into long gray stripes. Before he even got used to this, the bike already slowed down again, and stopped at the entrance of a gigantic skyscraper. They both dismounted, and he followed her slowly to the entrance. While looking around there, he noticed a large reception and there was the woman standing who had introduced herself to him as Hilda. She greeted the woman behind the reception counter: “Hi you Sygun, here is …. yes, what is your name anyway?” she asked him suddenly. “Eh, my name is Ralph, Ralf Derckx, but …”. “No buts,” smiled the woman whose name Sygun he had heard just before, “it is really your name, believe me.” She pressed a button and soon a door was opened in the wall.”Please go through the door there,” the receptionist said to him, it is the elevator, and press in there the number 1″
Still totally perplexed, he walked to the door, stepped into the elevator and pressed the button with the 1. The elevator started to move, and when it stopped, the door went open, and he heard a male voice speaking: “Welcome to Valhalla!”
He walked in the direction of the voice, and then he saw a man sitting behind a computer. The man looked at him kindly. “Did you say Valhalla”, Ralph dared to ask. “But yes,” was the reply. “You were in your life an Asatru, so you belong after your death on Midgard here in Asaheim.”

“But, well, I mean,” he began, collected his thoughts then together, and started again: “This is supposed to be Valhalla? That can not true, I see no throne, no ravens, no gods, no Einherjar, with swords … something must be wrong here!”

The man smiled and replied: “When you were still on earth, were you walking around with a sword? Did you lived in a hut, which was heated only by an open fire, and where the smoke disappeared through a hole in the roof? Did you gather your food in the forest and were you hunting for your meat? “
“No,” he replied slowly, “of course not, but this is not the earth here!”
The man was still smiling kindly, and continued: “But if everything on Earth has changed so much, why should not this world here also change? You see, you should feel yourself at home here, and if you would come here at once a situation where you had to fight every day with a sword and a spear, then you would have big problems, because you’ve never learned so!”
Before Ralph could reply something, the man continued speaking: “It is quite understandable that you’re confused at the moment, so I’m going to tell you the story in short, the details must be saved for a later time. My name is Woden, the leader and manager here. And to anticipate on your next question….yes, I have two eyes, at least, we sure know the many techniques of organ transplantation. ” And he showed a big smile.

Then he continued: “Each floor of this building represents a historical period, here on this first stock I am sitting behind a computer, at the top live the Saxons, Bructeri, Batavians, Chatti, Cherusci and all the others over who you have read so much. When I’m there, I’m sitting on a throne. Up there the warriors practice sword fighting, at this floor here everything is customized to your time and culture. You are pilot, from tomorrow you’ll practice with some others in air combat. And your friend Bjorn, who arrived here some weeks earlier, works in our the computer network, and codes also dangerous viruses, which are then secretly smuggled into the network of Niflheim.
Well, that’s the short version. Now go thither, “and he pointed to an open passage,” there are your contemporaries. Sit down to just those who make acquaintances and make new friends, I wish you much fun here anyway.”