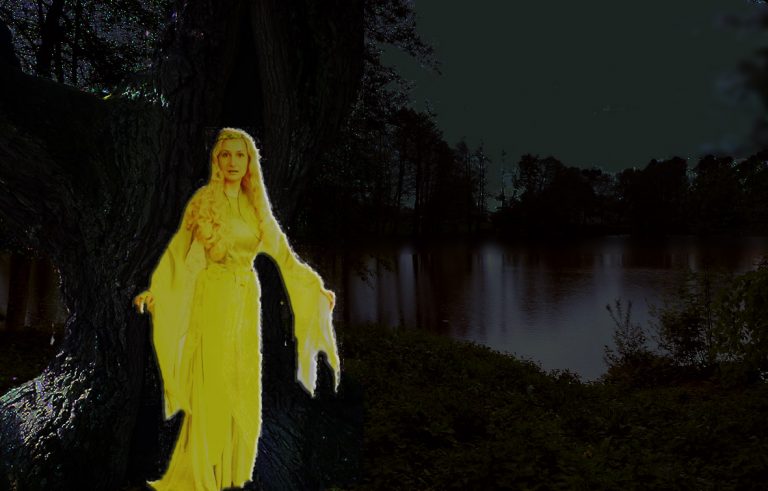 Actually, she was a real late riser, and if she did not resign herself to the discipline of a much too loud alarm clock, it was nothing special at all for her, that she decides to get up a good while after noon. Her profession as a writer and freelance journalist made it really easy for her to decide spontaneously late at night not to set the alarm.
But this morning everything was different.
Seemingly almost immediately after she went to bed last night, oh well, shortly after midnight, that deam came over her:
She was walking in the nearby park. It looked like she was the only living being there, no other people were around. It was very quiet. That was not really surprising, because the night had just started withdrawing, making place for the first signs of twilight. It was still much too early for even the most avid jogger or human-dog couple. She stood still at the big old oak tree on the small lawn, about twenty meters away from the big pond, where not even a sleepy duck was swimming. She knew that tree very well and in summer she loved to sit under that lovely oak, leaning against its trunk.
At the very moment that she would walk on, a soft but clear voice came from the tree saying to her: “Hello Emmy.”
She wasn’t scared or frightened, but she did looked very astonished to the tree. As she did not see there someone, she turned around, looking for the one who had greeted her. As she looked again at the tree, she noticed a small yellow golden glow that quickly became bigger and brighter and then she saw a shape coming out of the tree. Af first the contours were rather vague, but then she saw, it was clearly a woman. An elf or a fairy maybe, she thought amazingly.
The same voice as before resounded again en she could see now, that it was that woman who was speaking. She repeated three times these same words:
“Wake up and come over here.”
Then the figure dissolved again and the light disappeared.
In bed at home, she woke up, remembering the dream.
Should she really get up now? Just because a dream-being said so? No, she decided and she turned around and almost immediately she fell alseep again.
But that same dream acurred again, everything was the same. And again, after the dream was over, she woke up again. And she thought again: “Shall I get up then and go to the park? So very early? Am I mad? But then, two times the same dream, that is really peculiar.
She was really in doubt, because it felt so pretty warm and pleasant under the comforter. Going then outside into the coldness of the night isn’t a pleasure. Then, even before she could think over her spontaneous decision, she hit the duvet back and rose up. Quickly she dressed herself, put on her boots and jacket and a few moments later she silently closed the front door behind her.
Under the light of the street lanterns she quickly walked to the park. Not a single lamp in the compartment building on both sides threw its light through a window. After a twenty minutes walk she arrived at the entry of the park and a few minutes later she stood for the old oak, just as she had done in her dream. Hopefully she waited until that strange dream would come to reality. AAs ater five minutes nothing had happended, some doubt arose.
From rather far away she heard a screeching sound, followed by a loud bang. She ignored that and kept fixing her eyes on the tree. And she still waited while she heard a short time later many sirens, with decreasing hope to see the wonder of her dream.
But after another fifteen minutes she felt the nightly coldness slowly coming through het jacket and very disappointed she turned around als slowly walked back home.
As she arrive in the street where her appartment was, she immediately saw something very dreadful had happened. The block of flats where her apartment was, did not exist anymore. What exactly had heppend was told to her by a fireman after she had identified herself:
“An airplane has crashed down on that building over there. We are still searching, bit it really looks like that no one, both from the plane and the building, no one has survived”.