With the help of the goddess Hurstrga 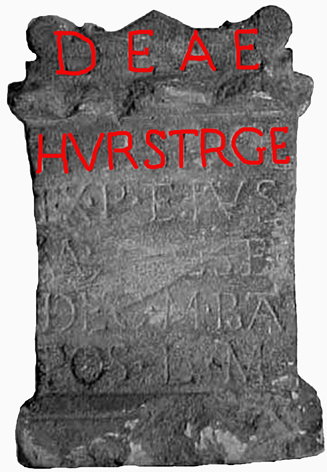 In 1954 an altar stone from the first century CE was found near the small town Kapel-Avezaath in the province Gelderland in the Netherlands on which the name of this goddess has passed down to us. The interpretation of the name probably points to a protective function, which may be related to a protective hedge made of thick brushwood around a settlement.

“The floor is to Wulf”, said the priest, who for the gods conducted the council.
Wulf rose up and alertly looked around to the faces of the other six members of the town council.
Gerdolf, his biggest opponent in the council seemed to be bored, but Wulf definitely knew too well that he would listen very carefully to be able to reply.
Wulf took a last deep breath and then started explaining his plan to the council. “We vowed our loyalty to the Emperor of the Romans. That was a good decision for us, but other tribes saw that quite unfavorably. You all know that well, each of you will remember their protests and threats toward us.” Except for Gerdolf all nodded their confirmation.
“When the trees will be green again next year, half of our all able-bodied men have to leave, because they are called by the Emperor to assist their legions in the battle in Britain. You all know that too.” Again most others nodded. “To protect our town with so many less men, we have to take other measures.”
Gerdolf’s feigned boredom had disappeared and his sneering voice resounded: “So so, you’re planning to send out our wives and children to stop attacking enemies.”
Wulf smiled for a short moment, then he answered calmly: “Our children need our protection and our wives surely would be willing to do that, but no, my thoughts didn’t go into that direction. My proposal is much less dangerous. My plan is to plant around our town a wide circle of brushwood around our town, a thick hedge of shrubs.”
Again that same jeering and squealing voice resounded: “Well, well, and you’re thinking, the enemy will be caught in that?”
“That depends on the kind of bushes”, Wulf answered, “many shrubs wouldn’t be a problem for enemies, but substantial thorn-bushes will.”
One of the other council members nodded his assent and said: “While they’re attempting arduously to work their way through those bushes, we can eliminate many of them with our spears.” Wulf showed a smirk on his face and said: “That was my idea too.” Another member remarked: “We just need a small way through it which we can guard.
But Gerdolf exclaimed: “Are we really such cowards to enclose ourselves that way? If some enemy appears, we just go towards them and chase them off, as we always did. I am not afraid of them.”
Then the priest stood up and spoke the closing words:
“It is a very good idea, we shall do it as Wulf proposed and it is also the will of our goddess Hurstrga. If indeed an enemy approaches our town, Gerdolf can go through that small passage and try to chase off the enemies.”
The sitting of the town council ended with hilarity.