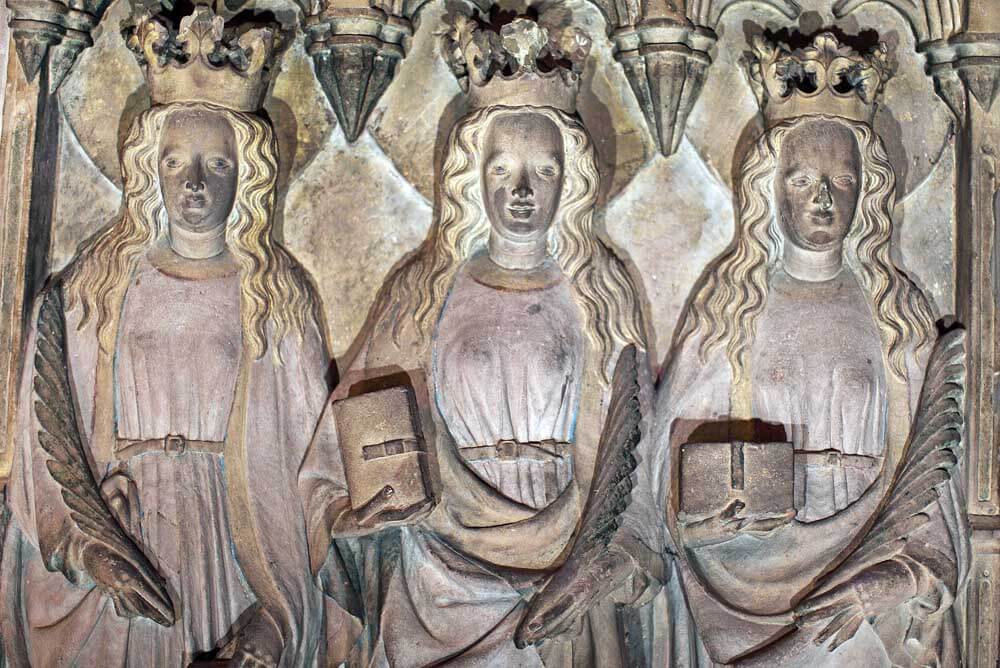 Quite awhile ago someone called me in a chat at Facebook with a request for some information about a specific goddess…..
The written conversation went about like this:

SHE: Yesterday I was reading in a book about goddesses and there is a name in there…. just that name without further explanation…. Barbet…. who is she?

ME: First let me ask to exclude mistakes: Are you sure, you didn’t read BASTET? The Egyptian cat goddess, daughter of the sungod RE?

ME: OK, then I can drop that.
There is a Eastern-European (Baltic) goddess called Saules Meita (it means ‘daughter of the sun) who is also called Barbelina. Does that fit to what you’ve read?

SHE: No, not really. It was a piece of text dealing likely with goddesses of Celtic or Germanic origin.

ME: Fine. After excluding that, I think I know who you read about. You better make a coffee or so and have a little patience, I’ve to write down now a somewhat longer explanation……..
From Christian (catholic) history we know the three ‘Beten’ (also written as ‘Bethen’ and ‘Beden’).
Although the same three were meant, they had in different regions varying names, like:
– Einbet(h), Ambet(h), Embet(h), Ainbeth
– Worbet(h), Borbet, Wolbeth, Barbeth
– Wilbet(h), Willebede, Vilbeth, Firpet
Meant with them are three saints, who’re appearing together and are honored as the ‘Three Virgins’.
Their cult exists since the late Middle Ages in smaller churches and chapels in Northern Italy (South Tyrol) and the western part of Germany up to the Rhineland. There are also spare traces in the southeast of the Netherlands. We know the oldest of these three saints from the 12th century, the other two, among them Barbeth, is known since the 14th century. Their cult became a little bit more substance after in the 15th and 17th century these three saints were declared as companions of the better known Saint Ursula.
Church leaders later then changed Borbeth (Barbet) in ‘Babette’ and that would point to the Saint Barbara, who, in her legend, was by her father imprisoned in a tower because she confessed to christianity.
During the Romantic era of the 19th century, especially in Germany which was a period in which was tried to associate Germanic history and mythology with the current society, the conjecture was brought forward, that these three saints in fact originated either from three Germanic triple goddesses, similar to the Norns of the North, or from the Gaulish-Germanic triple mother cult which was the veneration of Matronae or Matres. However, these romanticists neither had any proof or circumstancial evidence nor even acceptable indications which would support this t’theory’.
In 1936 the German Hans Christoph Schöll, who was in Heidelberg locally known for researching the region where he lived, came up with the theory, that the three saints were developed from pagan-Germanic times, which would have also been an Indo-European triple goddess which should have survived through the ages among the farmers of Germanic origin.
Because Schöll didn’t presented any scientific foundation and because etymological parts of his theory were soon proven wrong, his theory was rejected widely: according to him the original names Ambet, Borbet und Wilbet were derived from Celtic….. Ambet should be here a virign-mother goddess, Borbet a maternal sun goddess and Wilbet a goddess of fortune and of the moon, together agricultural fertility and harvesting goddesses and protectresses against illness and problems at parturition. These etymological derivations however were all proven false.
Inside some feministic alignments in the last decades of the 20th Century, Schöll’s theory was adapted and the ‘Bethen’ were as three goddesses placed in a gynocentric oriented heathen religion (gynocentric: the feminist view, according to which the woman is understood as the norm and the man as a deviation from the norm). Accordingly, archaeological finds were interpreted in a way that they would fit in those views.
Also other writers took up the idea and wrote articles about the three ‘Bethen’ and their possible pagan origin. However, no acceptable theory about a heathen origin was developed until today.

So, resuming:
From a scientific point of view…… forget the idea of a Germanic goddess with that name.
From a religious point of view….. go ahead if you want to worship the goddess Barbeth – religion does not need a historical validity to exist. 😉

She: Thank you! That perfectly fits to the book I read in yesterday. It is good to know, that a goddess Barbet most likely belongs into the sphere of fantasy.