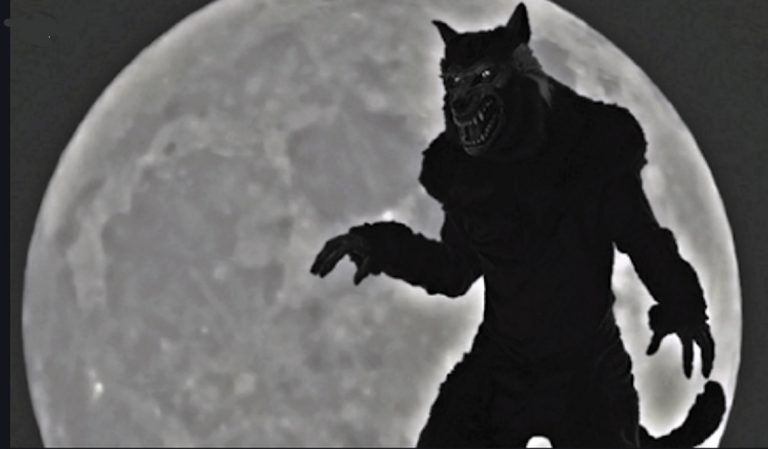 The text read out loud by an artificial voice:

Through the ages a lot has been written about werewolves. Here’s a short extract about that phenomenon, taken and translated from the German book “Mythologie der Germanen”, by Elard Hugo Meyer, Strasbourg, 1903. For many decades, this work was considered a good researched scientific source. Today it is just a curiosity, nothing more.

The deep-seated illusion that when a belligerent man dies or dreams, his soul will appear as a vicious animal such as a wolf or bear, may cause an uneasy man to actually feel like he’s turning into such a creature when the nights are long and dark. He wills his senses and limbs into the melancholic wildness that seems appropriate for a wolf as it pounces on a herd of animals in the still of the night. Compelled by this same illusion, some people were quick to believe that a man who was inconsiderately active at night may have fallen to the same kind of mania, believing every word of his endless ranting.
How close to reality were these myths?
The saying goes that a werewolf can be seen returning home in the early morning, his face pale and blood in his beard. An expatriate who was banned from human society for disturbing the peace was called WARG by the Goths and the Salian Franks – WARG, the wolf, or forest stalker who lives the life of a wolf in the dark woods, wearing the head of a wolf, ags. wulfes heäfod, and was hunted everywhere as the sacred temple wolf, vargr i veum, hunted to the furthermost reaches of the sky inhabited by man. According to Old Nordic law as well as the Sachsenspiegel [1], bears and wolves are always restless animals, even in an enchanted forest.

Werewolves carried out their sinister doings at the darkest time of the year during the Twelve Nights, or they were born during this time. If a werewolf casts off his skin on the 9th day, or even in the 3rd, 7th or 9th year, this is tied to cultural beliefs of what happens to a person’s soul after death. The legend says that a man who has drowned and turned into a seal sheds his skin every ninth day to become human again; Other tales from Germany and ancient Greece say that a dead man, especially one who has died prematurely, returns on the 9th day after his death, which is the last day for appeasing the dead with sacrifices. In Pommerania, such a person who returned from the dead was called a Nine-Killer, because their werewolf activities last nine years – the same period of self-banishment, such as being condemned to live the life of a wolf, that followed a murder in Greece. Yes, a man who has risen from the dead now stalks as a werewolf, such as the mayor of Ansbach who died in 1685.
A walking corpse magically takes on the form of the man when he was alive. In Pommerania, criminals who were not tried for their crimes turned into werewolves after their death, living off the flesh of humans. In Normandy, corpses of the damned became werewolves, breaking out of their coffins and fleeing the graveyard.
King John of England, having no country to rule after his death, was also said to have roamed as a werewolf. When you regard the fact that the old legends of Danzig tell similar stories of such “werewolves” escaping from their graves, calling them vampires, one can see how embedded this sinister belief is in society. After all, the Greek (demi-gods) Heros also returns as a wolf and commits acts of vampirism. It is interesting to point out, that the one legend from Sweden say that wolves will attack the living dead at every chance they get, as though they would sense a rival.

[1] „Sachsenspiegel”, or Mirror of the Saxons, is the oldest collection of customary laws compiled in German