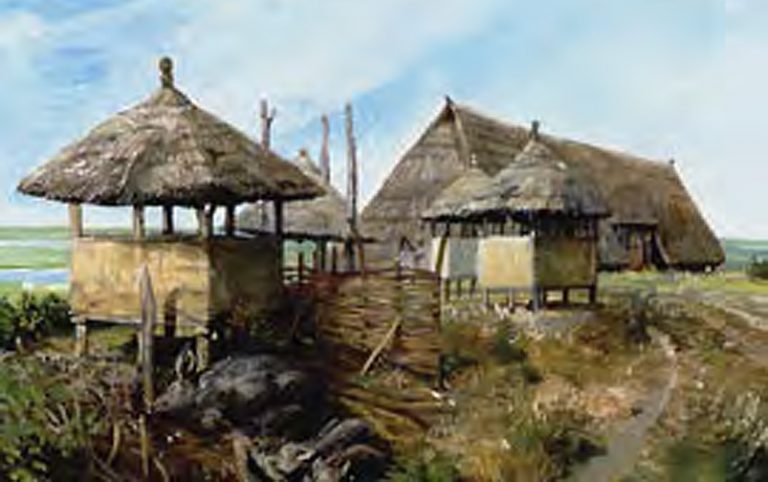 The people of the Tubantes

This is the uncorrected and not proofread translation of the original German article “Das Volk der Tubanten”.

The Tubantes, Latin: Tubanti, were a small Germanic people who probably lived around the start of the Common Era in a region in the east of the Netherlands, in whose name the name of this people still echoes today: Twente. 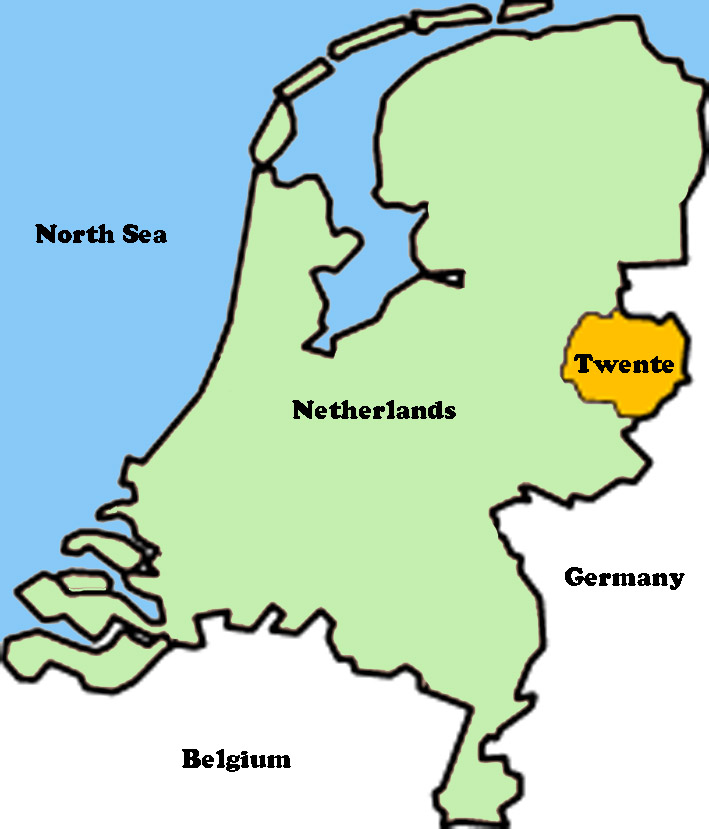 Other (Latin) spellings of the name from Antiquity are Tuihanti and Tubatti. Later as Tuianti (in 797), Tueanti (in 799), Thuehenti (in 851), Tuente (in the 11th century)
The Roman politician, historian and writer Tacitus mentioned the people in the 1st century CE. in his “Annals”, Book 1, Chap. 51:

To extend the scope of the raid, the Caesar divided his eager legions into four bodies, and, for fifty miles around, wasted the country with sword and flame. Neither age nor sex inspired pity: places sacred and profane were razed indifferently to the ground; among them, the most noted religious centre of these tribes, known as the temple of Tanfana. The troops escaped without a wound: they had been cutting down men half-asleep, unarmed or dispersed.
The carnage brought the Bructeri, Tubantes, and Usipetes into the field; and they occupied the forest passes by which the army was bound to return.

However, the Roman leader Germanicus was prepared and the Germanic army suffered a defeat. This event taken place is also reported in 17 CE by the Greek geographer and historian Strabo in a list of Germanic peoples who were defeated by Germanicus. In his “Geography”, book 7, chap. 1 it reads:

In the triumphal procession the priest of the Chatti, and many other prisoners of the various defeated peoples, the Cathylci and the Ampsani, the Bructeri, the Usipi, the Cherusci, the Chattiari, the Chattuarii, the Landi and the Tubattii, were brought along.

Tacitus reports in Book 8, Chap. 55 of his “Annals” that the Ampsivarians in 58 CE, through their leader Boiocalus, the Romans asked for the land to settle on that was reserved by the Roman military for their herds of cattle and sheep. This piece of land north of the Rhine was previously owned by the Chamaves, Tubantes and then the Usipii. The request was refused. The Ampsivarians then started an uprising against Rome and wanted the support of neighboring peoples. However, these were threatened by the Romans to stay out, and so the Ampsivarians received no help:

… the Ampsivarian clan, thus left isolated, fell back to the Usipi and Tubantes. Expelled from their ground, they sought refuge with the Chatti, then with the Cherusci; and, after a long pilgrimage in which they were treated in turn as guests, as beggars, and as enemies, their younger men found death on a foreign soil, and those below fighting age were portioned out as booty.

In 69 CE the Tubantes supported Julius Civilis, the leader of the rebellious Batavians with a cohort of warriors, who was soon defeated by the Ubians.

In a speech of praise (Panegyricus) to Emperor Constantine the Great, published in 321 CE, it says:

Why should I mention the Bructeri, why the Chamavi, why the Cherusci, Lancionae, Alamanni, Tubantes?

The text refers to the invasion of Bructerian territory in 308 by this very emperor. Although the Bructerians received support from neighboring peoples such as the Tubantes, Constantine won.

Two inscriptions on votive stones from the third century, which were found near the Hadrian’s Wall, record the name Tuihanti, who at the time served in an auxiliary unit of the Roman army, the Cuneus Frisiorum – Frisii was a name that was used in Roman times for most Germanic peoples north of the Rhine, not a peoples name, but as an area name. The Tubantes and their residential area were also part of it. 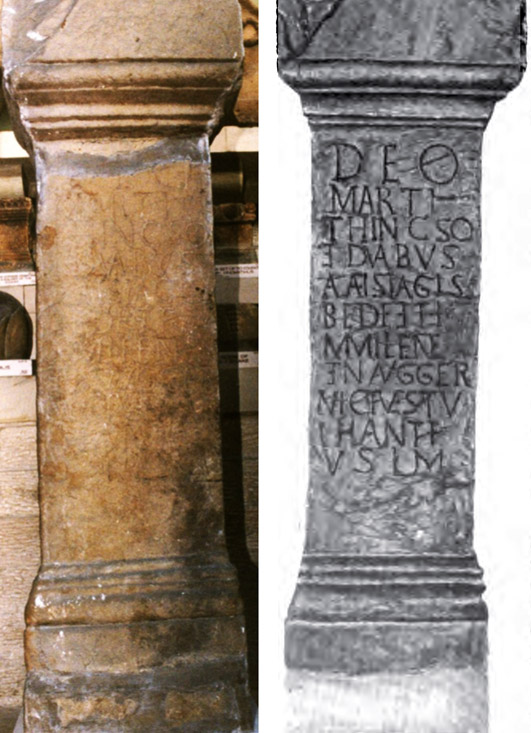 The inscriptions attesting to the Tubantes say:

Translated:
The Germanics of the (people of) the Tuihantes gladly and deservedly fulfilled their vows to the god Mars Thincsus and the two Alaisiagae, Beda and Fimmilena, and the divine spirit of the emperor.

Translated:
The Germanic tribesmen of the Tuihantes in the auxiliary force of the Frisians of Vercovicium under Severus Alexander gladly and deservedly fulfilled their vows to the god Mars and the two Alaisiagae and the divine power of the emperor. 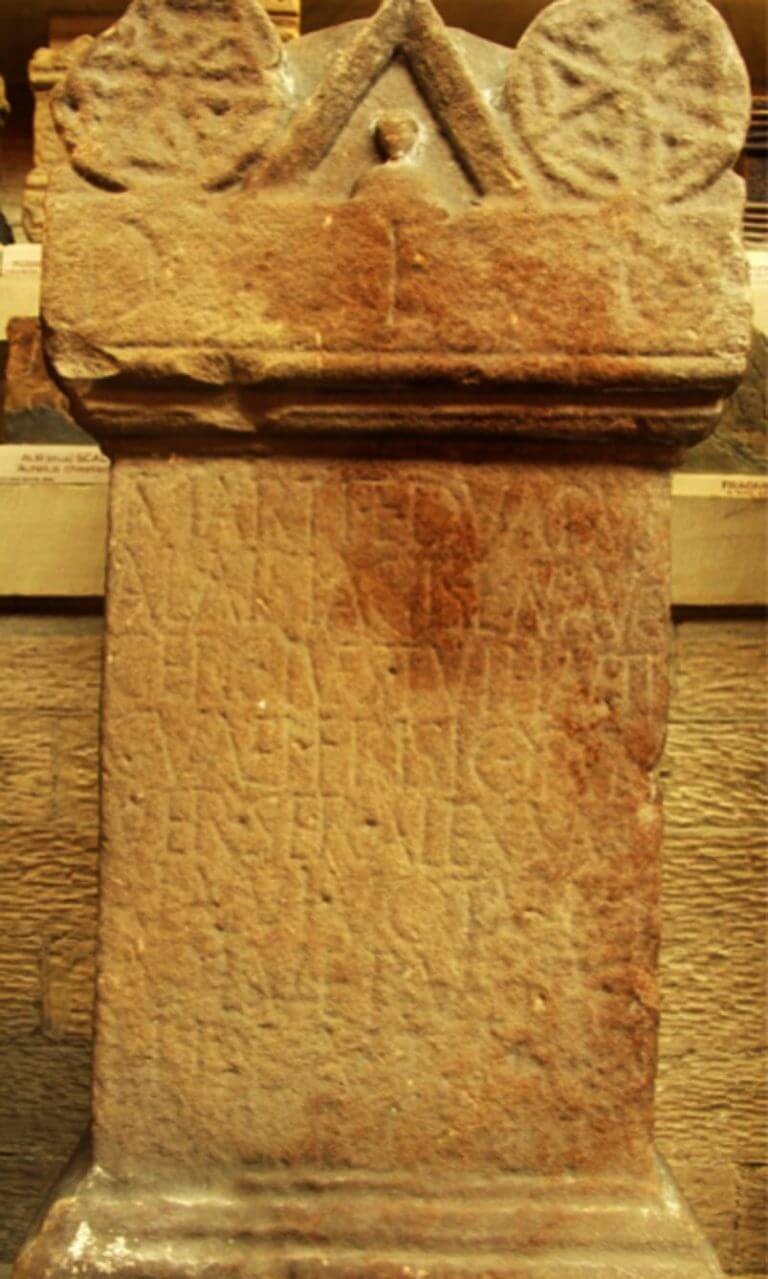 In the first inscription, which only speaks of Tubantes, the god is called Mars Thincsus.
In the second inscription, where Frisians are also mentioned, the god is only called Mars. This leaves scope for considerations such as:
Did the Friesians have another god identified with Roman Mars? And then did Tubantes and Friesians agree on only the name Mars, since this could then apply to both peoples?
In any case, it appears that Thincsus was a god of Tubantes and not of the Frisians. In addition, this god is mentioned only in this very inscription, a god of a relatively small people. Nevertheless, a huge network of speculations has developed about Thincsus – more on this to read in the article “A Court called Thing – ‘þing’”) on this site.

What exactly happened to the Tubantes is still somewhat controversial; according to an older view, they are said to have merged with the Saxons. Today, however, it is assumed that they became part of the Salians, the people who may have been the founding people of the Franks – therefore the Tubantes are seen as a sub-people of the Franks.

There is a possessive compound in it, presumably with a la-suffix added. The first part consists of the Germanic cardinal numeral twi ‘two’, the second part is related with OHG. hansa ‘warband’, Gothic ‘hansa’ group, crowd ‘, OE. hös related ‘entourage’. (The dental tenuis to be presumed at the end of the root to be pre-Germanic is presumably related to Celtic: kymr, Cant: ‘crowd, Troop’, Plural. Canneu, Oil-Irish cite gathering, both developed with different vowel gradation each.
As to the type of composition compare with OHG zwibar, zubar ‘vessel with two handles’, the adj. zwizungi ‘double-tongued’, HG. Zwieback (rusk), Zwielicht (twilight), the place name Zwiefalten, etc. The group name thus designates an association that originally consists of two parts.
This name has probably been extended to an ethnonym, because it lives on in the Dutch landscape of Twente (Twenthe, older Tuchenti). It now forms part of the province of Overijssel in the Netherlands, which borders on the German region of Westphalian Münsterland. (Similarly, the name of the Dutch province of Drenthe, which was recorded as Thri-anta in the 8th century, can be analyzed as *Dri-hanti. Quasi-synonymous with Tuihanti is the group name Tubanti, meaning ‘two counties’, which can be found in the same context.
The researcher Steche therefore considers that it could have been the Frisian translation of sugambrian Tuihanti. Typologically cf. furthermore the Gallic ethnonym Tricorii ‘consisting of three armies’ etc.