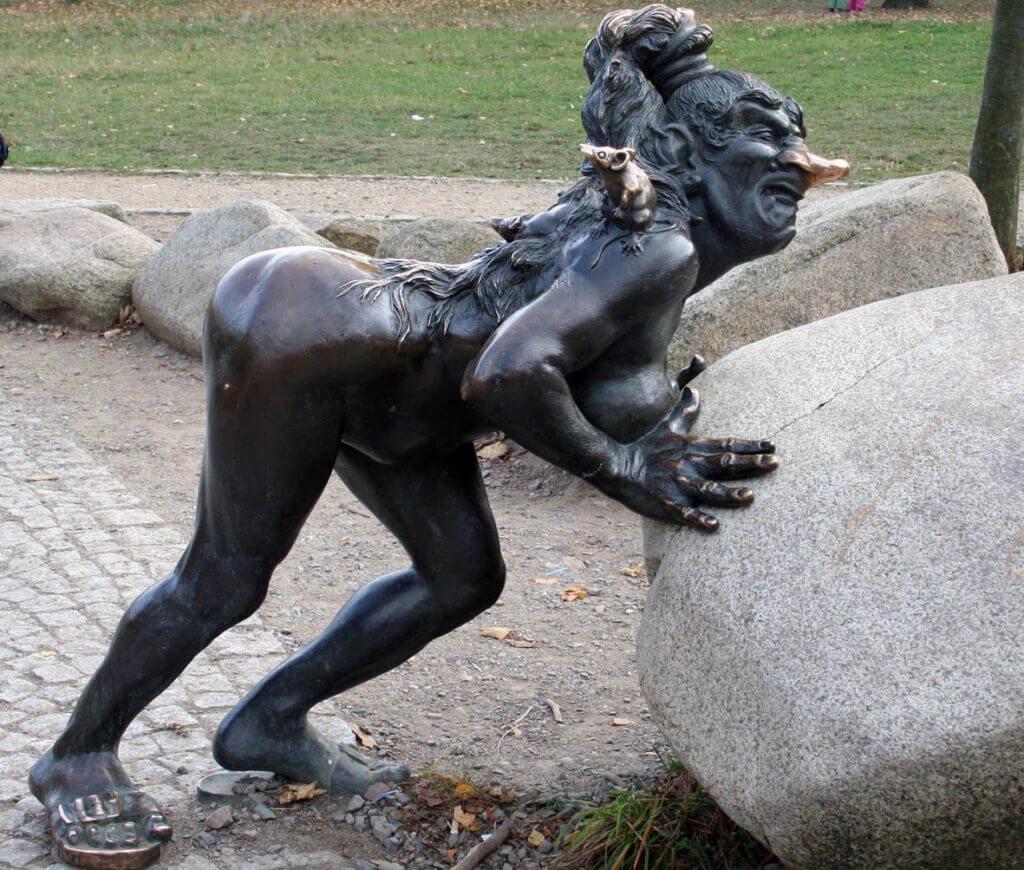 Sculpture of a witch at the witches’ dance place in the German town Thale. Source: Wikimedia commons, public domain.

Presumably from the 14th Century a Middle High German incantation has been handed down, which clearly shows the superstition of that time which existed within the Christian dominated folk religion. The spell probably was named after its place of discovery, since the 17th Century the document was in ownership of a Bavarian prince-elector and before it belongs to the collection of Henricus de Prusia Videlz de Coto(wice); the word Prusia is an old spelling of Prussia, a former German kingdom. Whether with this word as part of that name a geographic area is assigned is not clear. In the next fragment protection against monsters, witches and the Furious or Wild Hunt is asked.

Fragment of the Munich Nightblessing

This has to protect me tonight
from the evil creatures of the darkness;
and I have to cross myself
against the Blacks and the Whites
who people call the good ones
and who went on the mountain Blocksberg,
against the corn demons,
against the cannibal giants,
against crossroad demons,
against the hags,
against resounding incantations,
against all evil spirits!
The gluttonous and fire-spitting ones,
the friendly and furious ones.
the Furious Host and all his people,
who’re carrying wheels and wearing rags
executed by breaking on the wheel or hanging,
you shall not be here, so clear off!

Some explanations to this:

• swarzen unde wîzen (against the Blacks and the Whites):
Likely black and white ghosts are meant here.

• Brockelsberg (the mountain Blocksberg or Brocken):
This mountain is part of the Harz mountain range in Northern Germany, which is in folk belief the venue where at specific days the witches on their broomsticks fly to.
Specifying this geographical information suggests that although this Munich Night Blessing spell was found in southern Germany, its origin may be sought more to the north. Appointing this mountain likely made in those days in southern Bavaria hardly any sense as part of a night blessing and we may rightly question whether the people there had ever even heard the name of this mountain.

• Bilwisse (corn demons) are:
a) in northern Germany corn demons who are well-disposed towards humans,
b) in Bavaria malicious harvest demons,
c) in Carinthia, part of in southern Austria personified twisters.
Perhaps derived from Bil, who is in Viking mythology the daughter of Wildfinn and sister of Hiuki and often referred to as being a goddess, but that thought is highly speculative and unlikely.

• Inanezzen (cannibal giants):
Translating this word with ‘cannibal giants’ is based on the Middle High German term „manezze“ which means ‘cannibal’; it also would point to ‘Giant – MHG: turse, turse, torse, turste, Proto-Germanic: *etunaz, which may be connected with Proto-Germanic etan, Germanic: *Ðsaz, *Úsa‑, *Úsaz, OHG: ezzan, d. i. to eat. Additionally manezze is, except for ‘giant’ also translated as ‘demon’, ‘devil’ and ‘evil spirit’.
Such gigantic cannibals are a well-known theme in folk tales and exactly on these tales the translation here may be based.

• Glôzan unde Lodevan (gluttonous and fire-spitting ones):
There is no unequivocal explanation for these terms, there are only several attempts to clear it up. A proposal sees a direct connection with the preceding sentence “against all evil spirits,” in the way that following on it those evil spirits are specified by listing them. That leads to the explanation “gluttonous and fire-spitting ones”, based too on few indirect indications in Middle high German sources.

• Wûtanes her (Furious Host):
In the section ‘Trutan unde Wûtan ‘(the friendly and furious ones), Wûtanes her und alle sîne man“ (the Furious Host and all his people,) Wodan is often interpreted.
Pointing to the previously mentioned information from a related dictionary, in Middle High German we have for ‘rage’ the words: wueten, wuoten, wūden, wōden, wuten, so the verse possibly could point to the God Wodan(Wotan), but this does not go beyond a rather improbable speculation, for, as said before, it is unknown as to how the name of this god was written in Middle High German.
That applies too for the region from which this Night Blessing originated. Usually, for Middle High German it is assumed that the Old High German spelling “Wodan” was adopted.
In those times there was no widespread, commonly accepted grammar and spelling; depending on the region or (royal) court the differences were more or less profound. Moreover, because the Spell presumably originated from a northern region, a mixing with a form of Low German or a local dialect is possible too.
The most likely translation of “Wutanes her” is “Furious Host” in its Christian meaning: an army consisting of creatures from hell.
The deduced specification of the evil spirits in the translation is at best a good comprehensible interpretation, but more it cannot be.

• Rädern oder Hängen (breaking on the wheel or hanging):
In the early 20th Century a theory was developed, assuming there were three kinds of deaths among the ancient Germanics or later Vikings in the sacrifice rituals for three gods:
– Hanging for the storm god,
– Breaking on the wheel for the sun god,
– Drowning for the water god.
Subsequently, only after Woden was labeled and called a storm god, the hanged ones and strangely enough also the broken ones on the wheel had been assigned to him – thereupon they would have become ghosts in the Wild Host. However, this speculation was, due to a lack of historical and mythological evidence, not commonly accepted. The assumption itself may seem to suggest that the reference for this ‘theory’ was precisely this Munich Night Blessing.
There may also be a connection with old folk belief:

If a wind is very strongly blowing and
storming, someone was hanged and
the storm goes on for three days.

Into that a ‘storm god (Woden) can be easily interpreted … afterwards, much later in time, because such an interpretation isn’t really probable for the 14th Century.

Fragment from the book “Wild Hunt and Furious Host”, by GardenStone