According to the recorded myths and church reports, this god was worshiped in Germany, in Thuringia, Upper Franconia and in the Harz low mountain range; In all three regions there are hills with the name “Stuffenberg”. All three have different names today. 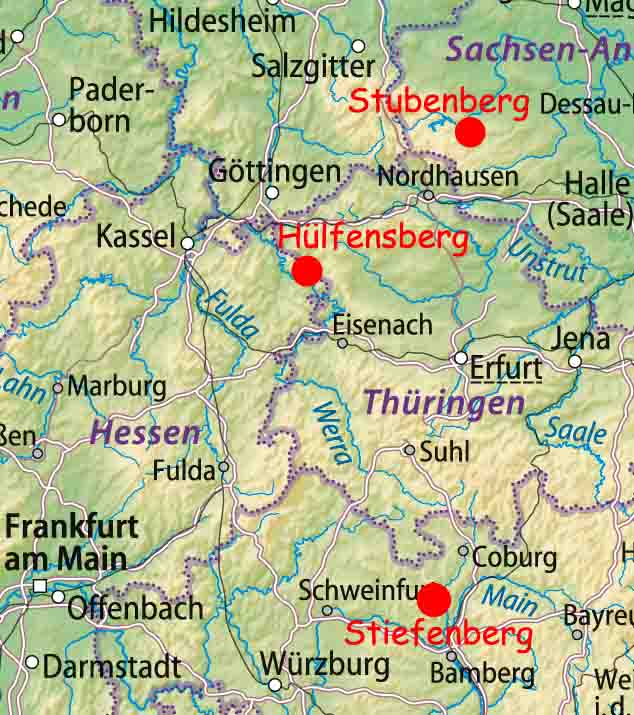 The basis for this overview was the map on: https://de.wikipedia.org/wiki/Datei:Deutschland_%C3%9Cbersichtskarte.png

Although it is often written that the name Stuffo first appeared in a vita sancti bonefatii (book about the life of St. Boniface) from before the 11th century, the earliest clear evidence is in the Historia S. Bonifacii of the German historian Johannes Letzner (1531-1613), who lived in the Renaissance period. In chapter 11 of his Latin work Letzner reports:

Boniface traveled with his entourage from Geismar across the Werra to the Stuffenberg. This mountain lies on the Eichsfeld between the towns of Heiligenstadt and Eschwege. On this mountain stood a diabolical idol called Stuffo, which was honored and worshiped by the locals as a god. Boniface had cursed and banned this idol, and then he rode into a hole that is still called Stuffen’s Hole, similar to the name of the mountain. Boniface had a chapel built at the pagan sanctuary and commissioned a priest to teach the locals about the Christian religion.

Although Letzner used old archives for his historical works and had the content proofread by other specialists of his time, his work is at least partially questionable today, especially when it comes to the details. A final clarification does not seem possible because not all sources of Letzner are available anymore.
In any case, this story relates to today’s Hülfensberg, on which a pilgrimage monastery is still maintained by Franciscan monks. On their website, the story says:

The first mention comes from a papal certificate from 1351. It calls the parish “St. Salvator auf der Stuffenberg”, through which in 1357 the Cistercians of the Anrode monastery received the patronage of the St. Martins Abbey in Heiligenstadt.

The Italian cardinal and church historian Caesar Baronius (1538-1607), citing German sources (in Latin), wrote about the life of St. Boniface about Stuffo and his mountain:

A statue of the idol, called Stuffo, stood there and was worshiped by the residents. Boniface cursed and damned this.

Before Letzner’s report, a bishop had already mentioned this god, but called him ‘Stauff’. Since the Renaissance, Stuffo has been mentioned in several works in which a connection with the word ‘Stauff’ is seen, which refers to the Staufenberg, a low mountain in the middle of Hesse. On all the hills mentioned in this context, sacred groves of pagan gods are suspected.
Another Stuffenberg is near Gernrode, today the district of Quedlinburg in the Harz Mountains. Only an engraving from 1819 still shows the old name, today the hill is called “Stubenberg”. The picture is titled

“The Stuffenberg on the Lower Harz near Gernrode, in the Kingdom of Hanover”,
Drawn from nature and brought in copper by Hertel, K. baier. Captain, and member of the Order of Civil Merit, 1819

The “Stubenberghaus”, built in 1754 by Prince Victor Friedrich of Anhalt-Bernburg as a hunting and pleasure house, can still be clearly seen and is still used as a hotel today. 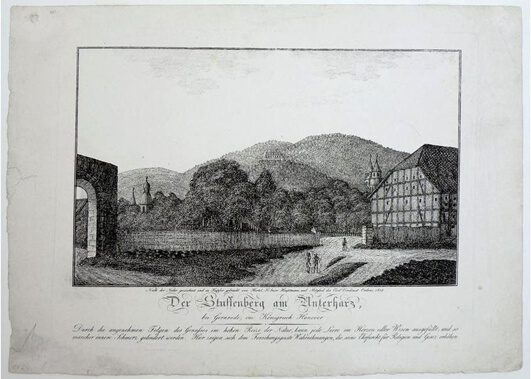 The third Stuffenberg is located in the municipality of Baunach in Upper Franconia, north of the city of Bamberg. A castle was also built on it in the 13th century, of which, however, only remains of walls still exist. However, it is listed on the website www.alleburgen.de: 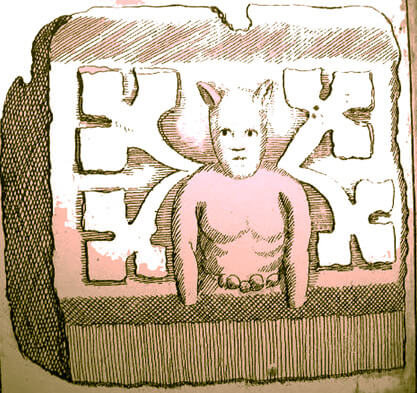 Perhaps this deity, at least according to a myth, was also worshiped in the south of the Dutch province of Friesland:

Once a well was dug southwest of the town of Stavoren, half an hour from the city, but instead of fresh water, salt water poured to the surface in such an amount that it threatened to flood the city and surrounding countries. The citizens then consulted the oracle of their god Staffo. The oracle told them that the source did not stop until the blood of a three-year-old boy was poured into it and mixed with this salt water. People followed this advice, and in fact the floods stopped and all water disappeared. Where it was, the country only became fertile again after three years.

The name of this god and his area of ​​responsibility are interpreted differently.
Based on the Germanic terms *staupa-, *staupaz and Old High German staupis*, staupum*, stouf: ‘mug, cup, drinking glass’, he is regarded as the god of drinks and drinking. The mug is also pictured here for drinking from a ‘fountain of knowledge’ based on some local myths in which Stuffo is described as a god who can be consulted for oracle questions.
Likewise, the same Germanic and Old High German words *staupa-, *staupaz, *staupis staupum*, stouf mean: ‘steep, high, cliff, reef, rock, mountain’. Stuffo could simply be interpreted here as ‘god of the mountain’ or ‘god of the steep rocky mountaintop’.