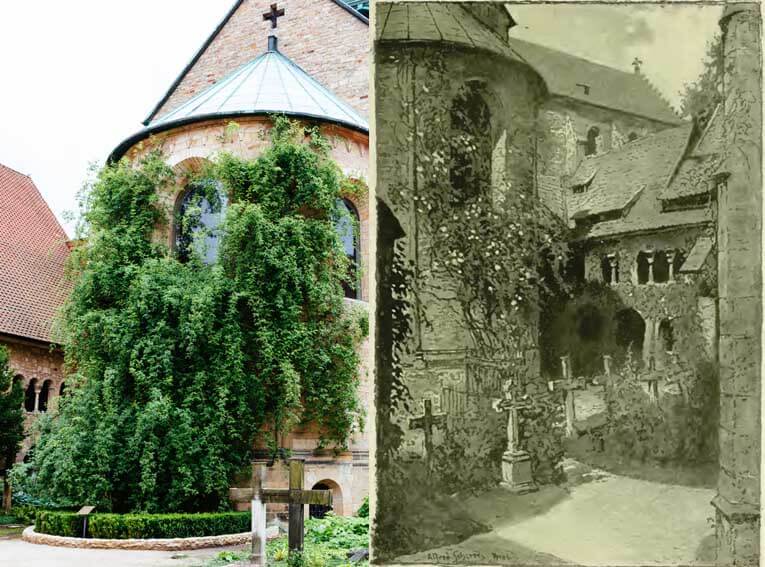 In his 1909 published book “Romantic Germany” Robert Haven Schauffler narrates at p. 200-202 a ‘Frau Holle’ myth, which probably is not known to many. And thus, this narration is cited below in this contribution:

“In the year 815, Emperor Louis the Pious, son of Charlemagne, was hunting in the outskirts of the Hercynian forest, and, in following a white buck, he outdistanced his followers and lost both his quarry, his horse, and his way in the Innerste River.
The Emperor swam to shore and wandered alone until he came to a mound sacred to the ancient Saxon goddess Hulda — a beautiful mound covered with her own flower, the wild rose. Again and again he sounded his hunting-horn, but there was no answer.
Then he drew from his bosom a casket containing relics of the Holy Virgin, and, while praying before it for jescue, fell into a deep sleep. When he awoke the mound where he lay was covered with snow, although it was high summer and everything about was green. The roses on the sacred mound were blooming more brilliantly than ever. He looked for the reliquary and found it frozen fast amid the thorns of a great rose-bush. Then the Emperor knew that the heathen goddess had, ^^by shaking her bed,” sent the holy snow in token that the Christian goddess should now be worshiped in her stead. When his followers finally discovered him he had resolved to build on that mound a cathedral to the Virgin Mary. And today on the choir of this cathedral that very rosebush is still in bloom.

All this is by no means a pure fiction. For it is certain that the spot was a headquarters of the old Saxon religion; that Louis transferred the Eastphalian see here from Elze in 815; and that nobody knows how many centuries old the roots of the famous rose-bush really are. Where it grows is the birthplace of Hildesheim, a name thought to mean “Hulda*s Home,” and the old cloisters that inclose it are worthy of their situation. In the autunm, when their smothering of woodbine breaks forth into scarlet and old rose and carnelian, into all pinks and oranges and purples — brought out the more by the deep browns and grays and yellows of the double arcade — it needs neither the Thousand-year Rose-bush, nor the crumbling tombs, nor the charming Gothic chapel, with its devout gargoyles, that is set in the midst, to make this cloister garden one of the sweetest shrines ever dedicated to the contemplative life.”

Various versions of the just told myth exist, they do not differ very much from each other; the core of the story remains in all versions. In the book “Goddess Holle” at p. 160 is another version of this legend narrated.
It probably affects an old Frau Holle folktale that was ‘Christianized’ in the existing narratives as the above one.